A McDonald's in Medford, Oregon, has a banner out front advertising that it is hiring 14- and 15-year-old workers.

"There are always staffing issues, but this is unheard of," the Biddle Road restaurant operator, Heather Coleman, told Insider. She said the situation is unique in her family's 40-year history operating McDonald's franchises.

The young workers have been "a blessing in disguise," Coleman said. "They have the drive and work ethic. They get the technology. They catch on really quickly."

While raising the minimum wage to $15 didn't bring in as many applicants as she'd hoped, opening the doors to 14- and 15-year-olds brought in about 25 new applications in two weeks, she said.

Coleman's restaurant isn't the only one looking for younger workers as fast-food chains are facing a shortage of workers with high turnover and low levels of applicants.

The Texas chicken chain Layne's Chicken Fingers is promoting workers in their teens and early 20s into management positions paying more than $50,000. CEO Garrett Reed says he's relying on 16- and 17-year old workers to run new stores because he was so short on older, more experienced staff.

"We're so thin at leadership that we can't stretch anymore to open more locations. I've got a good crop of 16- and 17-year-olds, but I need another year or two to get them seasoned to run stores," Reed told The Wall Street Journal.

A 16- to 19-year-old can expect to make $28,860 a year, according to the Bureau of Labor Statistics, but 19-year-old Jason Cabrera makes $50,000 as the general manager of a Layne's Chicken Fingers location, along with the potential bonuses linked to his performance, Anna Cooban reported for Insider.

Earlier this year, a sign at an Ohio Burger King that said "Do you have a 14- or 15-year-old? Do they need a job?? We will hire them!" gained traction online.

Labor laws for minors vary by state, but the Department of Labor set 14 as the minimum age for nonagricultural jobs. At ages 14 and 15, children are allowed to work in restaurants and quick-service businesses, and the number of hours and times of the week are specified by law.

Minor workers are entitled to be paid the same minimum wage as other workers, but workers under 20 can be paid as little as $4.25 an hour for up to 90 days of training. If a state has a higher minimum wage, that would supersede the minor wage.

According to one expert, hiring younger workers might be a smart strategy to get through an especially difficult period. "It's really tough times for staffing, why wouldn't you try to figure out how to hire people?" Kalinowski Equity founder Mark Kalinowski told Insider. "Over time we'll get back to normal," but until then, this might help restaurants survive.

For restaurants, the alternative to finding new pools of workers is closing. Three Chick-fil-A restaurants in Alabama had to close their dining rooms over lack of staff, though they continued to make food for delivery.

"We, along with many businesses, are in the middle of a hiring crisis," the Calera, Alabama Chick-fil-A restaurant said in a Facebook post. A McDonald's location in North Carolina made a similar move, closing the dining room while keeping the drive-thru running.

Restaurant workers continue to quit the industry at record rates, moving to jobs where they don't have to interact with angry customers.

Do you have a story to share about a retail or restaurant chain? Email this reporter at mmeisenzahl@businessinsider.com. 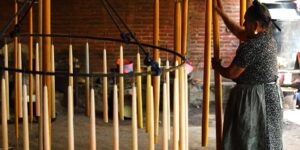